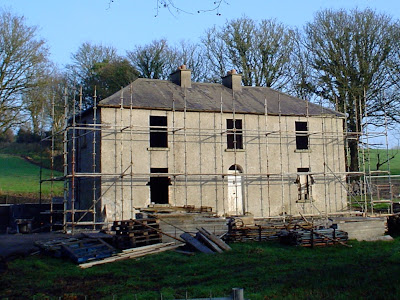 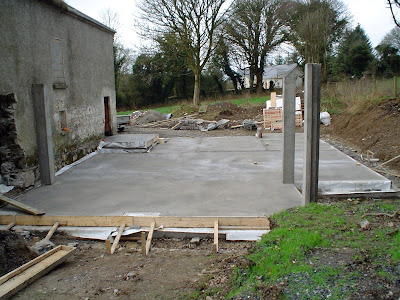 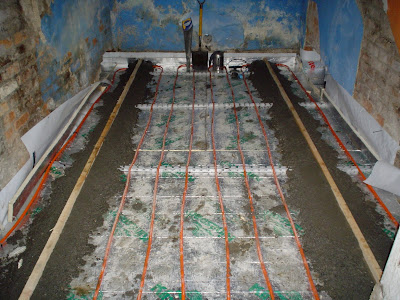 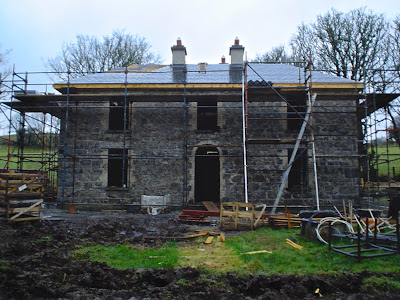 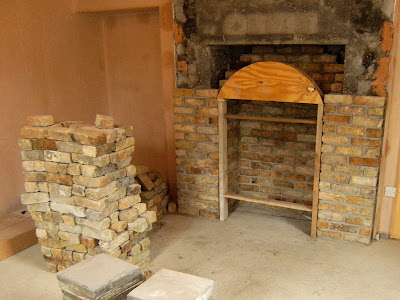 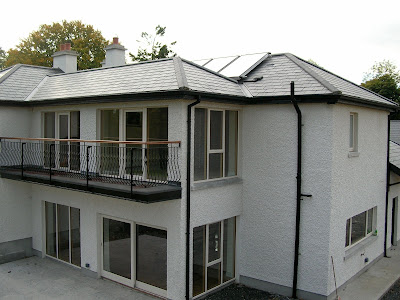 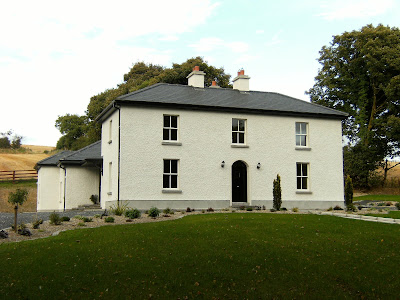 The owners of this cottage approached us with architect drawings for a very pleasant south facing extension. With spectacular views over one of Westmeath's finest lakes, the large glass area is of great benefit. 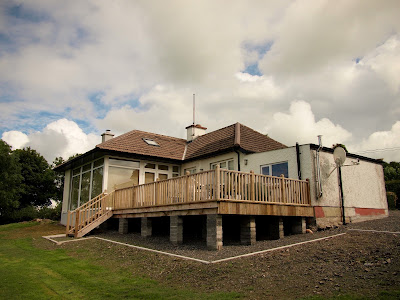 We completed the project on time and to budget. A generous decking area will be ideal for barbecues in the summer. The aesthetics of the original construction were retained by reusing the existing roof tiles, supplemented with selected second hand roof tiles sourced from our suppliers. 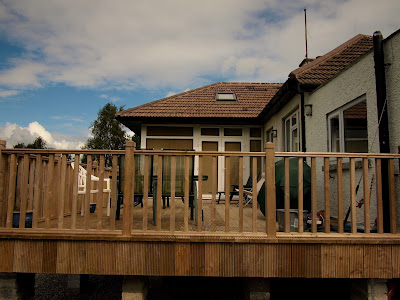 A modern, open plan kitchen and living was created by completely renovating the existing kitchen area of the cottage, and creating an opening in the existing rear wall leading to the extension. 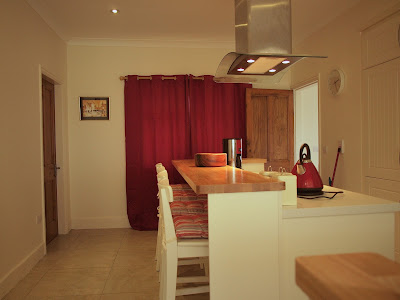 The extension allows for a generous, bright and airy living area. Overall a very pleasant living space has been designed and realised, while keeping the character of the original cottage intact. 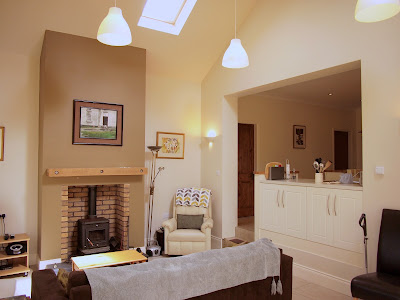 Posted by Ciaran Reilly at 1:02 PM No comments:

Our JCB telescopic handler was essential in gaining access to replace deteriorated gutters, fascia and soffit to a church building. The last few year's extreme winter weather events had damaged the gutters, and weathering had caused deterioration to the fascia and soffit. 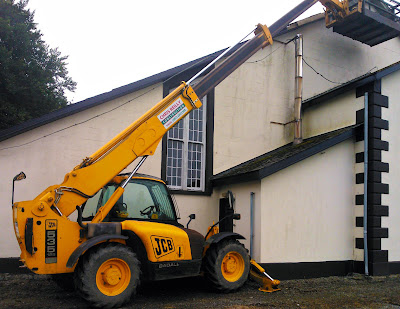 The old timber fascia was replaced with durable aluminium fascia with PVC soffit boards. Backing timbers were repaired as necessary. Heavy duty, extra wide gutters were provided to cope with runoff from the long span roof present. Improved weather proofing will increase comfort levels for occupants, reduce drafts and heating bills, and increase the sturdiness and serviceability of the building.

Posted by Ciaran Reilly at 3:04 PM No comments:

We were chosen as main contractor for the renovation of a large town house and the construction of two new apartment units at the rear. Access to the site was limited. Careful consideration had to be taken towards the movement of plant and materials. 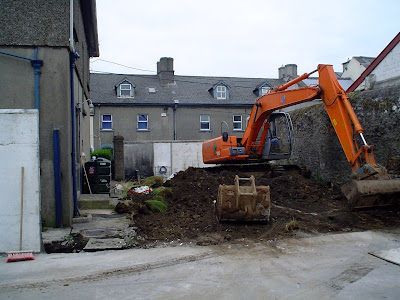 Road opening licenses were obtained for service connections to water and sewer lines in the street. These works were carried out at night to minimise disruption to traffic. 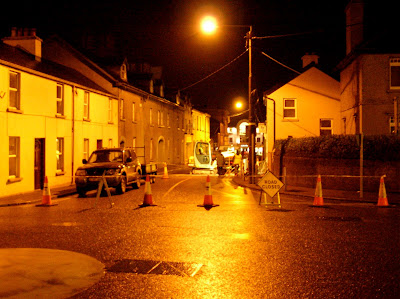 The character of Manilla House was retained during the sensitive renovation, while the architect's design met all current building regulations. 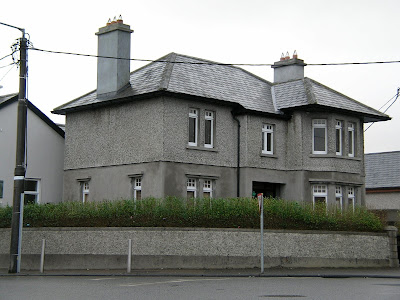 Four quality town centre apartments were created, close to all services, allowing residents the choice of freedom from car ownership and bringing life back to this area of Mullingar town. 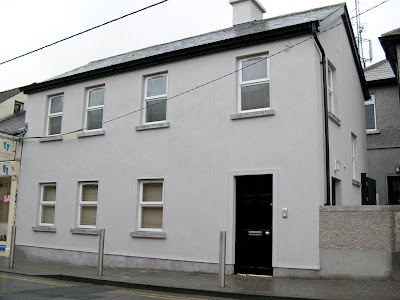 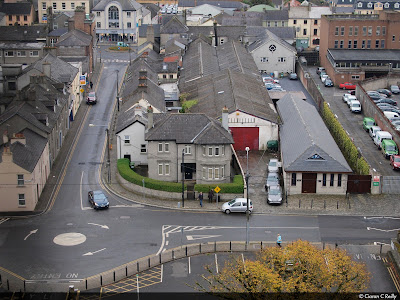 Posted by Ciaran Reilly at 5:14 PM No comments:

Following a competitive tender process, we were awarded the contract to construct this additional wing specially designed for the care of pupils with autistic spectrum disorders (ASD) within Milltownpass National School. 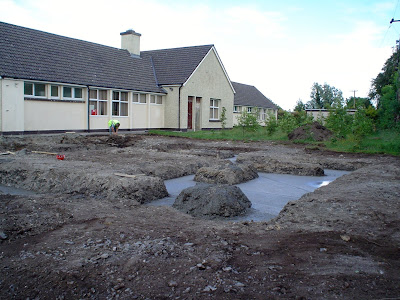 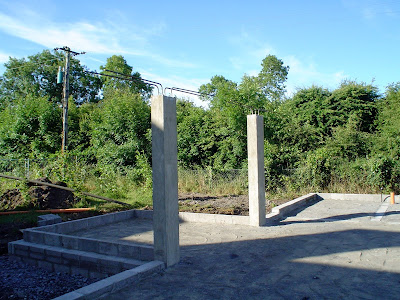 Tying the new building into the existing structure while maintaining normal school operations was a challenge. 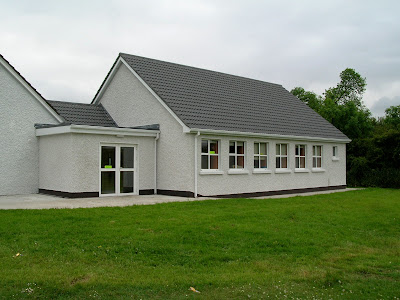 The majority of the work was completed during the short summer holidays, allowing this vital new teaching resource to be opened for the new school year. 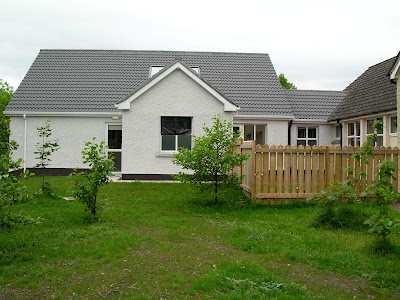